Amazing day yesterday, easily one of the top 5 Ponquogue best for me, perhaps even the best. First, a round of applause to the meteorologists at iWindsurf.com:

Noon Update Forecast is on track so far, but the low looks to be strengthening further today. The late day winds could push much stronger then originally forecasted, with gusts pushing into the 30s. Watch trends. 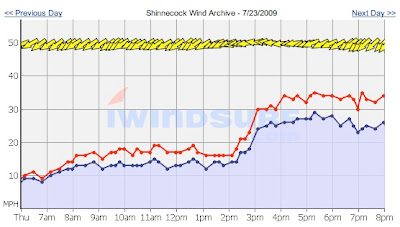 When I arrived after 3pm and found the Wolf & C.D. heading out on 5.8/6.2, I knew they'd be back soon. I went straight to 5.2 / 93L, and with the recent low tide, shorebreak was gentle and wind aplenty. Waves were 3' and building, and I went at them full-steam, jumping high, crashing backloops and devouring big air after such a long drought. This led to gluttonous over-consumption and eventual intoxication as I hung on to the 5.2 for far too long. Re-rigged to 4.7 and spent some time playing on the clean 3-6'+ waves, but was already too spent to really enjoy it. The waves were more on-shore than usual, coming in SSE to the E-ENE wind, and they served up a playground (more like amusement park, or even NASA training facility) for jumping and riding.
Read more »
Posted by Jeff, aka Peconic Jeff at 1:10 PM 5 comments:

My "full report from a Demo newbie" as posted to the LongIslandWindsurfer Yahoo Group, describing my first wave sailing session at Democrat Point:

Well it wasn't classic Demo as per the regulars, nor did world-class wave described by Graham Ezzy show, but I'm more than glad I finally showed up to scope out the scene and see what all the fuss is all about. It took me just under an hour to make the drive from Hampton Bays, where the trees and wind chimes were going off next to Peconic Bay, but very little action on the ocean. I tried convincing the Peconic crew to join me in the pilgrimage: Scott Kielt was at Cupsogue beach with his family, on the other side of Moriches Inlet from Fire Island, and he reported "12mph at best". Michael Alex opting for time with his wife at Mecox bay was stuck searching for a plane on his 7.0. The Wolf also hung with his family, and when I spoke to him this morning, he said "so you got to Demo and the wind died, right?" 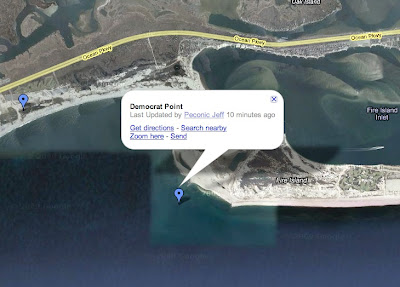 Not at all. Driving along the Robert Moses Causeway across the Great South Bay, I could see the wind was cranking 6.0 or better. I almost felt blinded by all the water as I sped across the long bridge, even though the sun wasn't out - or maybe it was just my wind-starved senses getting overloaded. I got to Cedar Beach just after 5pm, and within 10 minutes the crew had assembled, choosing sails from 5.6(?) to 5.9. It was good to see Brook, Joe, Steve, Pete and George, all of whom I either knew or met once previously. Brook and Pete started schooling me on the Demo do's and don'ts ("stay upwind of the channel" was the tip that sunk in), when jolly George Marr came over to say "bah, don't listen to those guys, just go have fun!"
Read more »
Posted by Jeff, aka Peconic Jeff at 2:48 PM 3 comments: