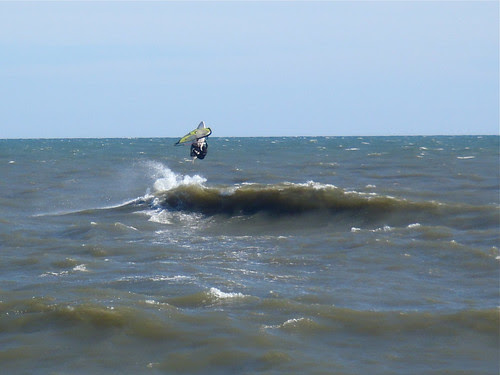 Glorious days like these pop up when you least expect them. Side-shore 5.8 and a south swell, first on the SUP and then on Scott's 98L JP. I mounted the GoPro HD Hero as a helmetcam, and here are the results:

With winds a tad too offshore at the Bowl, we trekked eastward for a classic Napeague session, outside the harbor at Goffs Point. Overpowered 4.7 and then 4.2, the outgoing tide against the NE wind made for smooth, tiny waves on the inside, and smooth, head high swells near the red can and lobster traps outside. 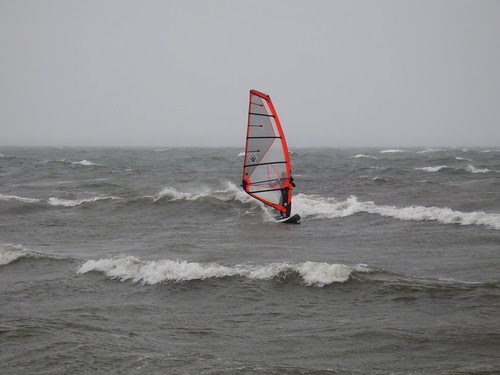 Posted by Jeff, aka Peconic Jeff at 4:03 PM No comments: 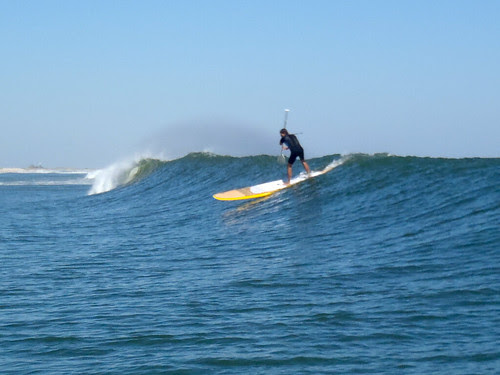 Last Sunday, the stars aligned. An offshore hurricane, full moon, and high pressure bringing warm, off-shore winds and sunny skies. Hurricane Danielle sent us shoulder to well overhead groundswell as it passed 1000 miles to our southeast. My cameras were charged and ready as I grabbed ride after glorious ride with Peter, Jon, Michael, and Steve in the biggest waves on Sunday. You'll find photos in this Hurricane Danielle Groundswell photoset, as well as shots from previous weeks in the Summer of SUP - 2010 photoset; handheld & paddlecam video from the weekend is compiled in this youtube clip:

GoPro HD Hero Paddlecam and Olympus 8010 handheld footage of myself and the crew catching waist to head-high waves on the outer bar at Tiana Beach last Sunday, which included many looong lefts:

and a few fun rights as well: 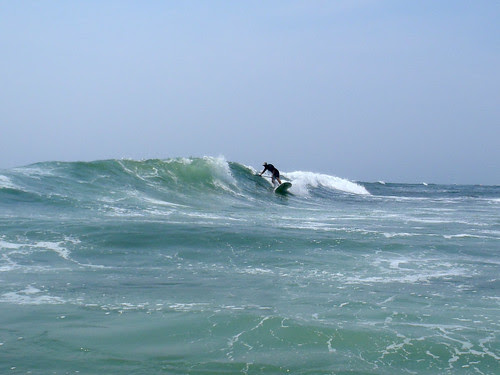 I left one wave out of the footage, which was probably the most beautiful, and most threatening, of the day. On one outbound paddle back through the channel, a giant set reared its head. Excited, I pulled out the handheld Olympus and started shooting. Joe Natalie scored a big ride, while an outbound Wolf dove for cover under 6' of whitewater. I was not spared as the shoulder reached right into the channel, knocking me off my SUP-photographer's perch. As I scrambled to my board, hoots and shouts of glee pulled my camera's lens to the next wave. There, in all its powerful glory, loomed a head-high, glassy-clean wave with a SUP surfer having the time of their life. All I could think about was how great would this footage be, and steadied the camera to capture the moment.


It's best in life to not make assumptions, especially if you're a surf photographer. Even though a rider may seem to be looking right at you, and even though this rider has surfed past you on several waves already, when you're down in the water and they're on a big wave, it's best to expect the worst -- that they can't see at all, and might run you over. We were lucky to get this lesson for free - both boards and bodies were unharmed. But life is also about learning from mistakes, making adjustments and trying it all over again. May we all return to the waves, be more aware and respectful of other riders, and when in doubt, shout it out!
Posted by Jeff, aka Peconic Jeff at 9:50 AM 4 comments:

The magic arrived August 7th.
Check out these and other SUP photos from the growing Summer of SUP - 2010 Flickr photoset. 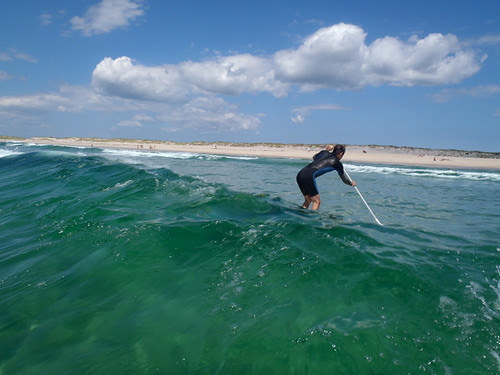 Also, check out the Peconic Puffin's report, which adds even more color to the day: Stand Up Surfing Extravaganza
Posted by Jeff, aka Peconic Jeff at 9:31 AM No comments:

Scott, the Wolf and I caught some perfectly aligned speed runs off the northern sandbar of Robins Island the other day. 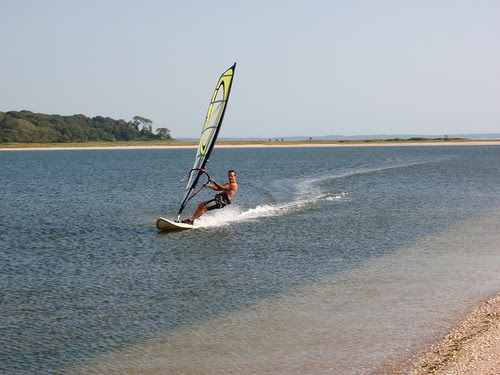 Check out the full photoset here: New Suffolk Flatwater (5 photos, 1 video)
If you have trouble with that video, try the YouTube version, though I wish youtube would default to 480p.
Posted by Jeff, aka Peconic Jeff at 11:06 PM 1 comment:

Jon, we had a terrible time after you left

After taking a look at stiff offshore winds and a small knee-high wave yesterday at L Rd., Jon Ford made a wise choice and left all small-scale action to the Wolf and I. And we had a horrible time with it. Just the worst. 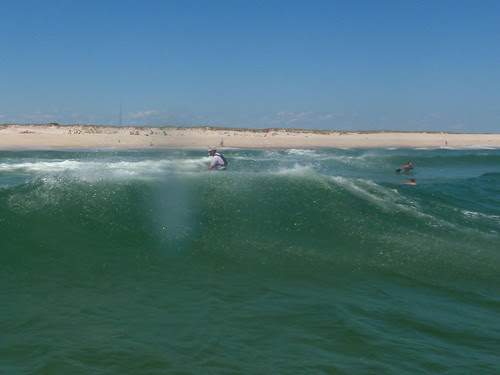 Frontside, Down The Line, SUP-sailing Nirvana

I (finally!) scored my first full-on side-off SUP-sailing session in waist-to-shoulder waves yesterday at L Rd. I rode the incoming tide, and... and... OMG I SCORED BIG TIME!!! :D :D :D WHOOHOOO!! :) No pics or videos this time (being hooked in on a board with no straps in gusty winds was too risky for the handheld camera), just sweet visions of bottom & top turns on windswept but building, sweet, sweet, sun-glistening waves, as seen from under the boom and through my fully-powered maroon 5.8 Maui Sails global. By the end the wind was cranking right off the beach, which was enough to clear out the remaining surfers and leave me with all the waves to myself! (I couldn't even get any Puffins or Windchimps to join me.) Sailed for 3 hours and caught dozens and dozens of waves. All-in-all I am fully stoked. Hopefully I don't have to wait another 2 years for these conditions. 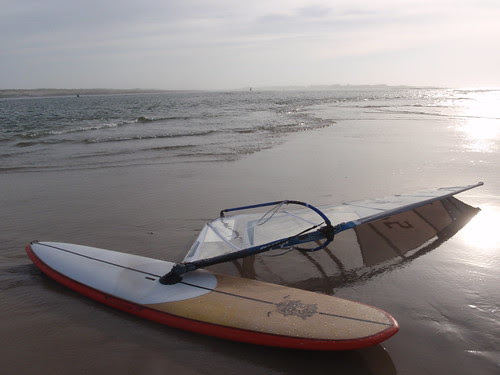 Here are two SUP wave sailing videos that shows the basic rig setup I was on: Starboard Demo and RRD Demo. My waves weren't quite as big, but you'll get the idea.

By the way, has anyone seen my ABK hat?
Posted by Jeff, aka Peconic Jeff at 8:35 PM 2 comments:

Dark and Sunny Waves at K Road and Tiana


Please offer your opinions on music vs. natural sounds in these paddlecam videos so far. Personally, I like the natural sounds of waves and chimp hoots, but find the grip squeaks pretty annoying. The requisite-for-SUP reggea is my first garageband experiment (my pursuit for royalty-free music suitable for youtube).
Posted by Jeff, aka Peconic Jeff at 10:01 AM 3 comments:


Also see the Peconic Puffin's report for this day: The Ice is Gone but the Wind Remains at Sebonac
Posted by Jeff, aka Peconic Jeff at 7:09 PM 5 comments:

In my last blog entry (a way-too-long 4 months ago!), I introduced the Clewcam to East End waters. Along with stints as a boom cam, ice cam and free-hand cam, the Olympus 790 & 8000 took decent stills, but only marginal video. The field of vision also missed a lot of close-range detail, and the cameras often took in sand and water, which is why I soon found myself drooling over GoPro's new HD Hero. With up to 1080p, 5 Megapixels, a 170° wide-angle view, and a tiny, indestructible waterproof housing, I was in business for capturing surf action from a new perspective... introducing the Paddlecam!

Perhaps most surprising was how well the battery performed in 38° air / 40° water temperatures. I bought 3 batteries in anticipation of them succumbing to the cold, but just 1 (a rechargeable 1100 mAh lithium-ion) held its own over the multi-hour sessions. For those looking to make their own GoPro Paddlecam, follow these excellent instructions from PaddleSurf.net. Here's a photo of my camera and mount prior to some early testing at Tiana Beach: 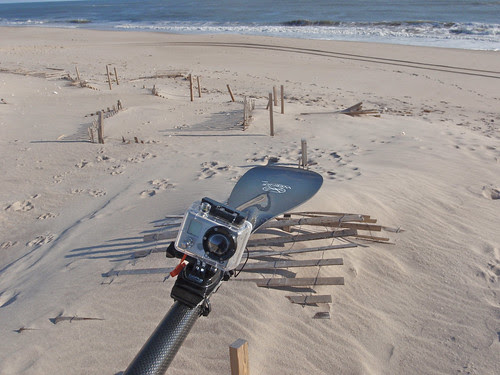