On rolling up to Sebonac Inlet early Sunday morning and hearing the 4.2 sail call, I knew I'd be entering risky waters. My small sail boom, an aluminum North Sails Red Series, was oozing a salty pus from the pins near the head. The next catapult could take it out - a feat I managed within only 5 minutes of sailing: 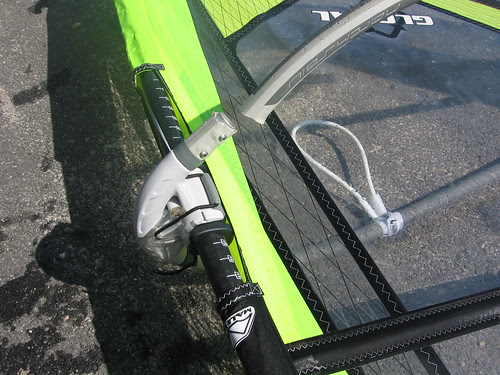 It was the first run out, where I usually make sure everything is balanced. While struggling with harness line positioning on the return tack, I hit a classically sweet Sebonac ramp and landed too far downwind and off-balance. Scott caught a good view of my slow-motion catapult seconds later. As he swung around to shout something at me (probably "Hahahhaha -- are you okay? -- Hahahaaa!"), I began to waterstart in the waist-deep water and suddenly heard the boom pop apart in its final corrosive gasp. Ugh! I wasn't too far from shore, but definitely a long way from the launch. Scott yelled something like "[blah blah whoosh blah] walk to the beach", which without the wind whistling through my helmet apparently translated to "flip the boom and sail back or you'll have to walk to the beach". Not hearing him, and forgetting this useful tip taught by ABK Boardsports and highlighted in the Puffin's account of my previous aluminum cracking catapult, I ended up walking the whole way back. I payed my dues, complete with self-created suffering and sacrifice (though the later reward was well worth it!).

As for my North Sails boom? Well, I had purchased it brand new at the Fall '07 swap meet at Windsurfing Hamptons, and one year later at the Fall '08 swap, Jon Ford noticed the oozing pus. I asked about the warranty, since the boom had malfunctioned barely after a year. Jon said he'd ask North Sails, but the answer came back negative. Jon suggested I might get one more season out of it, which I did. Sunday's boom busting session marked the end of the cold, high-wind season, and also the end for my use of aluminum booms. From now on, it's Maui Sails carbon (just gotta start saving)!
Posted by Jeff, aka Peconic Jeff at 2:34 PM 3 comments:

Nothing like a sunny and warm, full-blast Sebonac session to spark the blog back to life! I've had a busy period the past month or so, which included a fun and blustery trip to Hatteras, a breakdown and untimely death of my aging windsurfing van in Delaware, a trip to Vegas for a surprise birthday party, and a presentation to 150 Miller Place HS students. Fortunately, the wind arrived on a weekend (Mother's Day no less!), and I was able to grab 4 fully lit hours on 4.7 / 77L, often reaching moments of nirvana after getting dialed in. 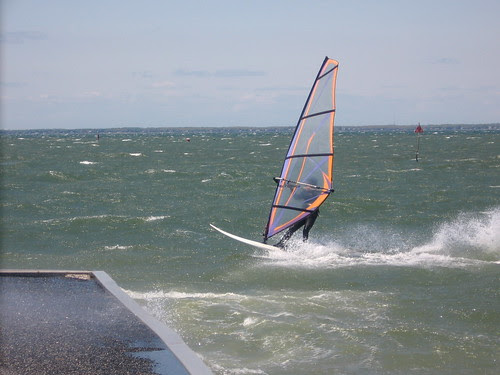 Also see the Peconic Puffin's report: Who WASN’T Tearing It Up at Sebonac?
Posted by Jeff, aka Peconic Jeff at 10:07 AM 3 comments: