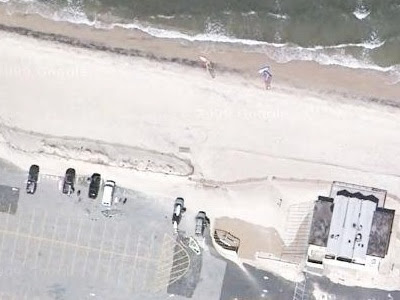 How wild is this? Zoom into Meschutt Beach in Hampton Bays on Google Maps, and you'll see a windsurfing session in progress. Boards and sails in the parking lot (is that the Puffin Mobile?), two rigs at the shoreline, and breaking waves, whitecaps and swell all captured in Google Maps Satellite mode (it is likely aerial photography).
Posted by Jeff, aka Peconic Jeff at 3:44 PM 1 comment:

Email ThisBlogThis!Share to TwitterShare to FacebookShare to Pinterest
Labels: Meschutt

Foggy day at Cupsogue, aka Cupfog*

Big time fog at the Cup today, it was crazy, but fun and safe for the most part. Scott, the Wolf, Fisherman, Bill Barber and I found 3-5' glassy clean waves on the inside, and 6'+ waves jacking up on the outer sandbar on the outside. I was on 5.2 and 93L the whole time, but often painfully underpowered -- twice in front of monster crumblers. One took me for a 10-15 second ride in raging whitewater while I held both breath and boom. (This led to one of two walks of shame through the fog). The visibility in the fog was a couple hundred feet most of the day, so you could make out the waves and other sailors no problem, but not seeing the beach most of the time was a bit eerie. There were some heavy construction machines (there for dredging Moriches Inlet) with lights on that helped with finding the launch spot, though the diesel fumes were not appreciated. I did have a few moments of glee, including jumping off the front of small, tightly packed waves and landing their backs, launching off a couple 6-footers, and best of all, riding a couple of those big ones, esp. early on when they were glassy and clean.

Unfortunately, I couldn't find my camera this morning, so no boom cam footage -- frustrating since today was so rare and eerie. On the fortunate side, we've got a windy week ahead!

* Cupfog title credit goes to the Wolf!
Posted by Jeff, aka Peconic Jeff at 8:26 PM No comments:

A sunny & windy day is just what I wanted for Christmas! Thanks to my girlfriend Chiaying for the photos and to my family for holding off Christmas activities until the afternoon!

Email ThisBlogThis!Share to TwitterShare to FacebookShare to Pinterest
Labels: Meschutt 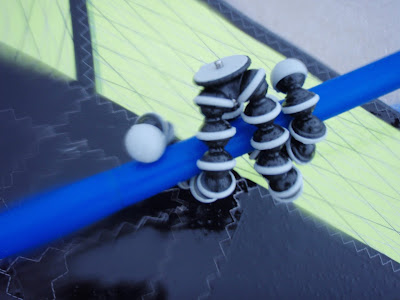 I was able to make the most of the less than stellar conditions this past Sunday thanks to an early Christmas present from a good friend who supports my windsurfing addiction: a Joby Gorillapod. The Gorillapod SLR-ZOOM (heavy-duty tripod) easily wrapped around the narrow 30mm diameter Maui Sails carbon boom, and supported my light-weight waterproof point-n-shoot Olympus Stylus 790 SW camera. Conditions during these runs were mostly underpowered 4.7, but the mount held surprisingly well through gusts, jibes and small jumps. Next will be to test this setup in the waves - stay tuned!

What a day - those few peak moments carving a bottom turn into a cutback, or anticipating a massive port jump off of head-high waves, made all the suffering (ie, fluky up/down winds, constricting drysuit, cold east wind, pelting rain, sweeping current and mid-tide shore break) totally WORTH IT!!

Nice to see a dozen sailors getting in the action, including (I had to stop and rub my eyes): Mike Burns! The flatwater freestyler "King of the East" was hungry for waves. Juiced after a recent Hatteras Cove session, he wanted MORE! Ponquogue was less than ideal, but Mike managed to several top/bottom turns on several wave rides, and one MASSIVE forward loop that he almost over-rotated. We need more stoke like this at our eastern beaches!