Across these waters of Peconic and Shinnecock there shreds a small but fierce band of primal watermen known as the Windchimps. Public sightings of the chimps can be as rare as summer wind and waves, which is why last Sunday I nearly dropped my paddle on seeing 2 female standup paddle surfers in the lineup.

NOAA recently announced that no evidence of aquatic humanoids has ever been found, but today I present photo proof of the elusive Chimpette! Knee-high waves and shorty weather seemed important to drawing her out. With the summer season hitting high gear, I'm hopeful we'll see more female aquatic humanoids catching their first SUP waves.
Posted by Unknown at 4:41 PM No comments:

Email ThisBlogThis!Share to TwitterShare to FacebookShare to Pinterest
Labels: SUP

My 4 year love affair with a Starboard Ultimate Blend 11'2" SUP snapped to a sudden halt Tuesday in overhead waves at Montauk's Ditch Plains.

A combo of TS Alberto and other coastal systems heaved solid swell toward the Long Island coastline, enticing me and Jon Ford to hike east and meet Andy Brant for some SUP-sailing. For the first 30 minutes, we sailed starboard tack in meaty head high waves, and caught some fun rides. Sadly the wind died, but with the building surf I de-rigged, grabbed my paddle and headed back out. 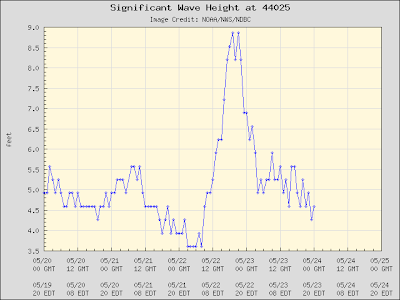 When I reached the far outer break, which seemed further out than we'd ever seen, sets were rolling in well-overhead. I caught a couple half-ride wipeouts, and let one wave pass under me which felt like a small house. Suddenly, out of the fog, loomed Poseidon's monster. With glee I started paddling, trying to match speed with the hulking mass. Speed, though was not the problem -- the 1-2' overhead and now pitching wave: problem. I dove off to the side, held my breath and experienced a massive pummeling. After getting thrown like a rag doll and dragged under, I swam for the top, and swam more, and finally lungs bursting reached clean air. I had survived; my precious Starboard Ultimate, had not.

The Ultimate will be repaired and retired to flat water paddling. I now search for a new SUP surf board. I've ridden Starboard's 8'10" Wide Point, and 9'8" Element in solid surf, and next will test the Fanatic AllWave. I'm looking forward to changing up to something new, but will always miss the original.

Lovers of wind suffering through the Summer doldrums found major relief Monday, with windsurfers trekking from the NY Hudson Valley, CT and beyond to the place where the thermals blow: Heckscher State Park in East Islip, NY. Following a weekend of waves (12 hours on the water over 3 SUP sessions) I could only last an hour or two on my 5.9, attempting a couple vulcans here and there. At this point, I threw my rig on the beach and grabbed the waterproof camera to capture these action shots in the late day sun.

Mike's Flaka by Peconic Windsurfer, on Flickr
Thanks to Mike Burns for the heads up on the wind, for entertaining my photographer's sweet tooth, plus for keeping my Dakine T3 harness safe and sound in his trailer since the EC Windfest last month. Here's his account of Monday's sesh: Windsurfing IS a drug!, where he's got photos of these moments as shot from the beach by Newsday photographer John Dunn.
Posted by Jeff, aka Peconic Jeff at 3:19 PM 3 comments:

A couple action shots from last November. Thanks to Bill Barber for finding these lefts, and to Scott Kielt for busting out the zoom lens and capturing these moments.

Hoping for more waves this Saturday, the forecast is promising!
Posted by Jeff, aka Peconic Jeff at 1:43 PM No comments:

Glorious days like these pop up when you least expect them. Side-shore 5.8 and a south swell, first on the SUP and then on Scott's 98L JP. I mounted the GoPro HD Hero as a helmetcam, and here are the results:

With winds a tad too offshore at the Bowl, we trekked eastward for a classic Napeague session, outside the harbor at Goffs Point. Overpowered 4.7 and then 4.2, the outgoing tide against the NE wind made for smooth, tiny waves on the inside, and smooth, head high swells near the red can and lobster traps outside.

Posted by Jeff, aka Peconic Jeff at 4:03 PM No comments: