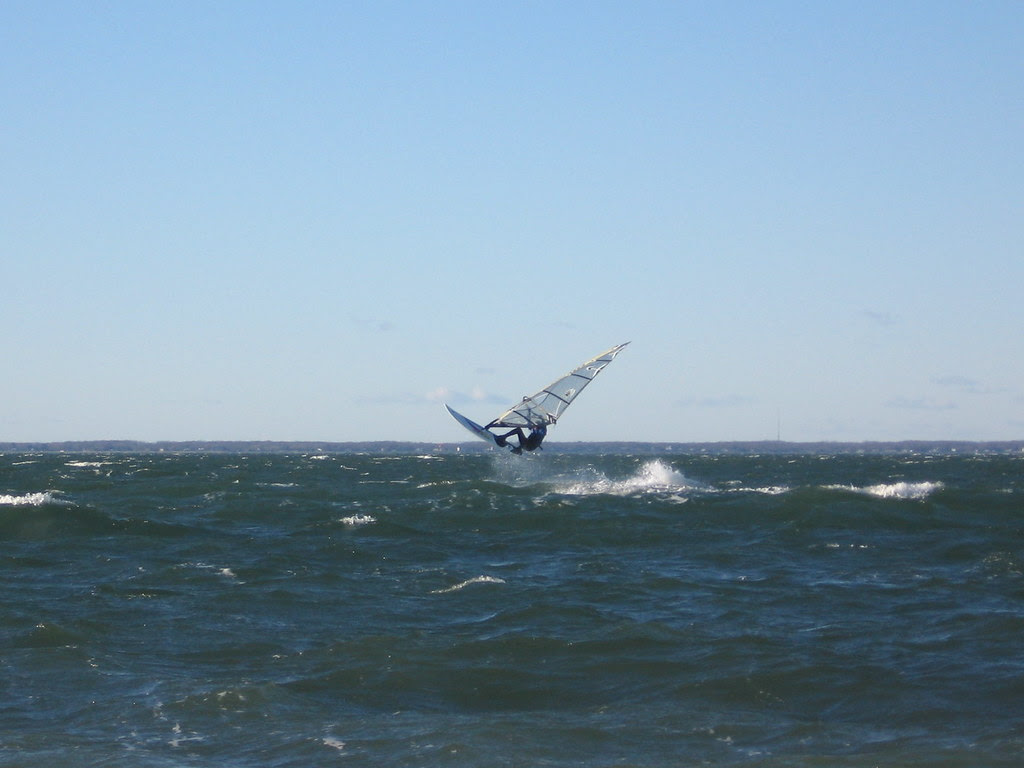 The last time it was blowin' NW 20-35 mph at Sebonic Inlet, I was stuck on shore with too much board and sail, wistfully snapping photos of jumps and jibes. This time, however, I was able to do both, riding the 89L Naish with a 5.2m to join in the fun, while taking some action shots during breaks. About 10-15 windsurfers took advantage of the Christmas Eve windfest, jumping, carving and having a great time. The photos are the real highlight of this post, so please check them out (preferably in full size) in this Flickr set: Sebonic Inlet - Christmas Eve '06. My two favorites include the one above (anyone know who that is?) and this one of Jon Ford shredding chop: 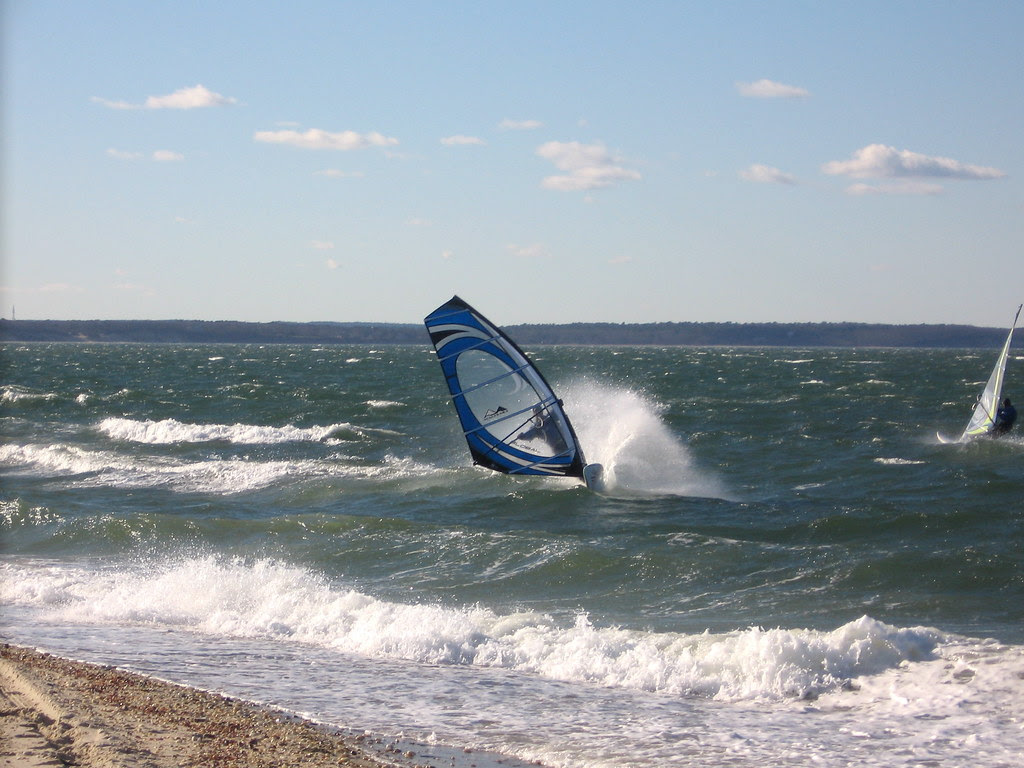 I, on the other hand, had a tough time struggling with poorly positioned harness lines and occasionally fluky winds. My arms quickly became tired, and after my first jump, I ended up catapulting, twice. This was my 3rd or 4th time on this shorter board, and after my previous successes, I realize I'm back at the bottom of the learning curve.

Posted by Jeff, aka Peconic Jeff at 5:22 PM No comments: 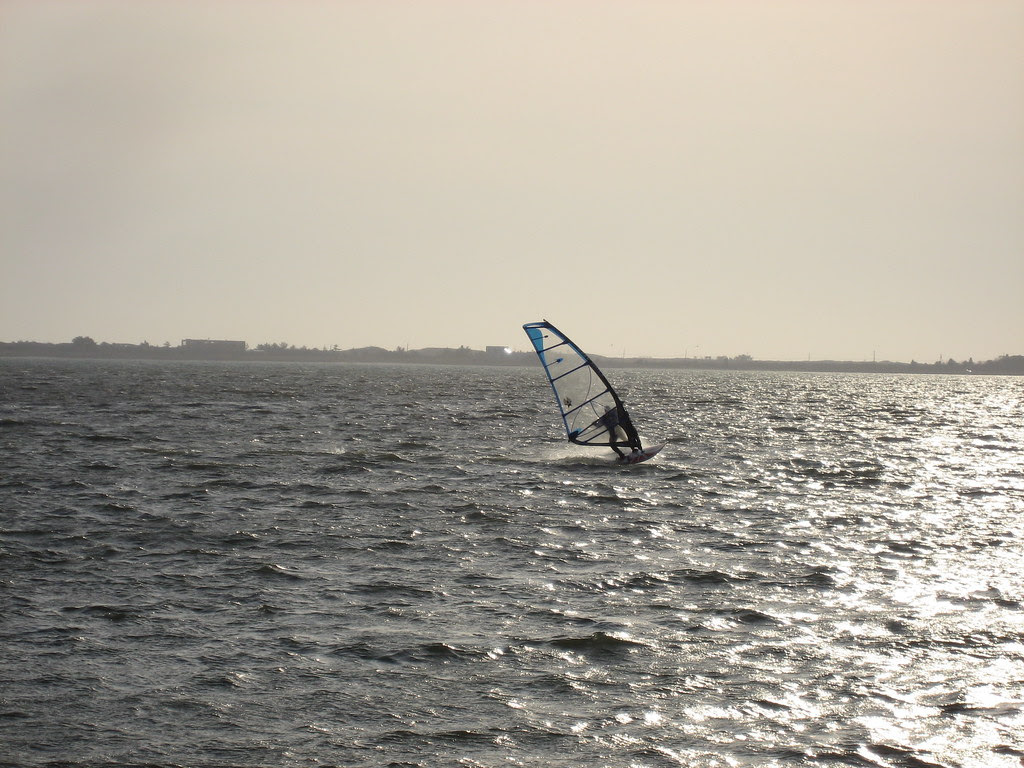 What a day over at Mecox Bay today! Gusty 15-25 mph SW winds and air temps in the low 50's (water temps manageable in the upr 40's). Originally I was hoping to meet up and surf with Michael, but unfortunately he was side-lined with a cold. I then checked in with Jon Ford, who was headed to Cupsogue to do some ocean sailing (apparently great on a SW). Unfortunately that launch needs a 4wd for access, the only major drawback of a van. Next time I'll plan better and see if I can borrow my brother's new monster pickup truck.

Arriving at Mecox around noon, I found a wide open bay with some decent chop building. I rigged the 6.2m to start, and managed the gusts until about hour later when they picked up full blast to 20-25. It was tough getting back, and a bit tiring, but the shallow bay made things easier.

My bro was cool enough to stop by in his monster truck and snap a couple pics and videos (thanks Keith!). I'll update this entry later with some highlights and spills; I welcome all comments and pointers!

Posted by Jeff, aka Peconic Jeff at 11:13 PM No comments:

Hark! A Peconic Puffin Flies In

I had no idea what an Atlantic Puffin sounded like until the recently resurrected Peconic Puffin flapped onto the windsurfing blog scene. Check this out (I'd never guess):

A big hello and thanks to Michael and the PP for sparking me back into action. I have been sailing over the last few months, but haven't made the time for a blog update. I'll be back-dating a couple "new" entries to try and get back up to speed. I also want to thank the PP for this highly needed and useful Long Island Windsurfing Map. You can add spots to it that aren't already there (or perhaps supply additional details for ones that are). One neat detail would be photos, which flickr does with their maps. For example, this is a map of photos I took across the East End while this is a map of the roughly 1500 windsurfing photos across the world!

Finally, the puffin picture and sound comes from the National Audubon Society's Project Puffin, which I actually lived 3 miles down the road from when I lived in Ithaca. I'm taking this as a sign from the universe and will be adopting a puffin for the year.