I finally began hitting my gybes consistently on flat water behind the Red Cedar Point on Sunday. You know you've hit a new level when you don't need to water-start or uphaul for 20+ minutes, and your wetsuit and hair dries out from just rippin back and forth and carvin gybes. Even dry, non-planing gybes like this one shot by my brother Keith made my day:

Now on to jumps, vulcans, and maybe that forward. There could be some good ocean sailing on Sunday, but I'd feel much better doing it with a nose guard attached (will it ever arrive from Europe?)....

Email ThisBlogThis!Share to TwitterShare to FacebookShare to Pinterest
Labels: video

Another tropical storm visits Long Island, this time as the remnants of Ernesto, which double-teamed with high pressure to the north to whip up some incredible east winds. The Shinnecock Inlet tower recorded 34 hours of 30-40 mph wind from Friday night through Sunday morning, with a peak gust of 55 mph late Saturday afternoon. 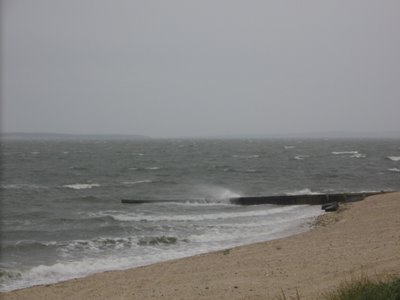 I got out Friday afternoon on Peconic Bay, and progressed from my 6.2 to the 5.2 as wind built from 15 mph to 25. It was such pleasure to be perfectly balanced with the small sail, fully powered by reliable wind, and jump off of cresting white caps and 2-4 foot swells. On one jump, however, my feet came out of the straps and I neglected to unhook and sheet out, and I catapulted around the front. My friend Steve says I would have done a forward if I had kept my feet in the straps - ha, that's one way to think of it. Fortunately, the Deviator kept me from smashing the board's nose, but the impact on the weak side still opened the crack created in TS Beryl. What a bummer, after an awesome day.

Around Noon on Saturday I swung over to the Shinnecock Inlet. The winds were really cranking at this point, and waves were crashing into the rocks, sending sea spray well downwind. A couple of surfers were braving the rough surf, but windsurfers stowed their 3.5 sails and gear as winds started hitting 40 to 55 mph. I've got 19 photos from that day here: Ernesto at Shinnecock Inlet - Sep 2, 06. Here are two that I like: 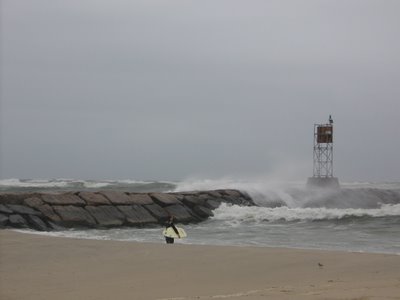 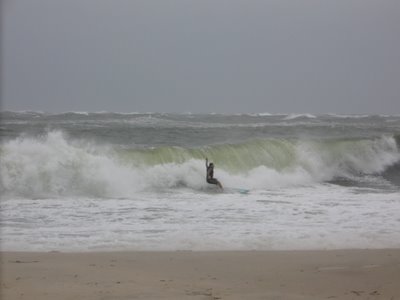 The constant east wind funneled a lot of water into the inner bays, and by the final high tide of the storm there was some minor coastal flooding, but nothing too serious: 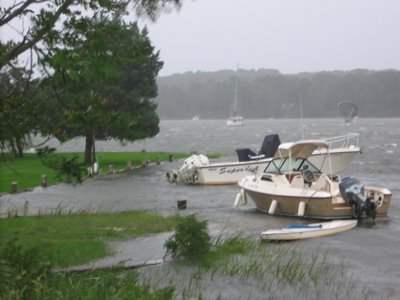 Posted by Jeff, aka Peconic Jeff at 10:47 PM No comments: